For many, the perfect destination for their first adventure in their new motor home is Elkhart, Indiana. While the name may not ring loud like some others in America, Indiana is an iconic destination for motor home owners. That’s because it’s very likely that your motor home, fifth wheel, or RV was built in Elkhart.

Known as the RV Capital of the World, here is a look at some of what Elkhart, Indiana has to offer.

What started as an area mostly inhabited by Native American tribes, Elkhart saw much of its economic expansion in the late 1800’s. It’s likely that this is attributed to the infrastructure created by the Michigan Southern & Northern Indiana Railroad Company, which was the first major rail line through the area. Elkhart now has three major railroads, including two Amtrak rails, which make up for a good amount of traffic through the city. As it stands now, the population of Elkhart now sits at around 50,000, and much of the economy is stabilized by the creation of motor home units.

Band Instrument Capital Of The World

Along with being known as the RV Capital Of The World, Elkhart is also known as the Band Instrument Capital of the World. If you played clarinet, flute, saxophone, or any other sort of instrument while growing up, chances are your instrument came from this community. With so many young musicians around the world, it’s great to take a stroll down memory lane by taking a road trip to Elkhart. 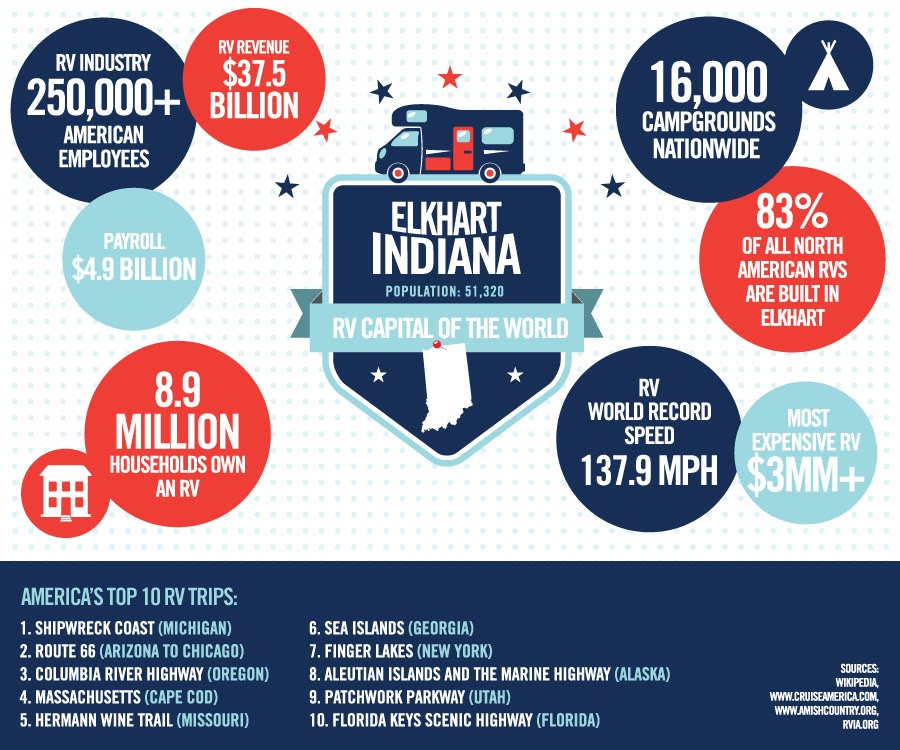 RV Capital of The World

As mentioned before, Elkhart is second to none when it comes to RV and motor home rig production. Forest River, Bennington Marine, Keystone, Skyline, Sun Valley, and Thor are just a few of the industry names that call Elkhart home.

Elkhart was also once home of the Elkhart Air Show. This annual event stopped in 2007 due to financial issues, but the community continues to keep it a part of its history. This air show brought in military, professional, and hobbyist aviation specialists for a performance that would light up the sky. Despite the fact that the air show has not been held for a few years, it’s presence can still be felt while visiting Elkhart, and it’d be great to see it resume again in the future.

Elkhart, Indiana is known as the RV Capital of the World. That title, along with a multitude of other activities to take part in, make it an enjoyable destination to consider once you have your motor home.

Crossroads Trailer Sales has been the #1 5th Wheel dealer in New Jersey for the last 9 years. Our 10 acre lot features over 250 5th wheels, travel trailers, and toy haulers to choose from. We are a family owned and operated business that has been proudly serving the RV community since 1988. Please contact us for all of your 5th wheel and trailer needs. We look forward to hearing from you and thanks for reading!

1 thought on “RV Capital Of The World: Elkhart, Indiana”