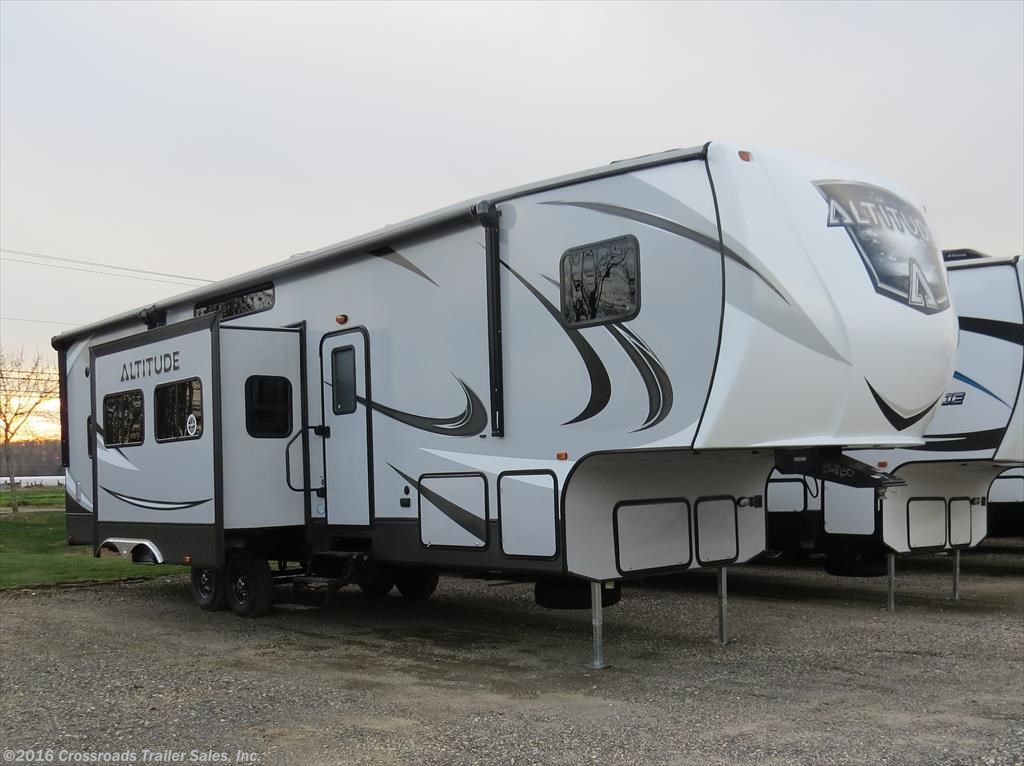 If your camping gear has expanded far beyond folding chairs and fishing rods to four-wheelers and motorbikes, it may be time to move up to a Toy Hauler to meet your action camping needs.

Even if the “action” on your camping agenda is touring around the campground in your golf cart, a Toy Hauler may be the right choice for your next RV.

Sports Utility RVs (SURVs), known as toy haulers, combine living space with a cargo area for your motorized toys. Toy haulers are an ideal solution for those who want to travel with their ATVs, dirt bikes, snowmobiles, golf carts and other motorized vehicles. In larger models, the rear compartment holds vehicles and gear with a gate that does double duty as a loading ramp. The front of the unit is outfitted as living quarters.

Toy haulers are also an excellent choice for people whose work takes them on the road; with the front providing comfortable accommodations while keeping tools of the trade, merchandise or show models safely stored in the cargo bay.

Since the early 2000s, toy haulers have become a major segment of the recreational vehicle market, with choices ranging from mini trailers to full-featured Fifth Wheel Toy Haulers. With more than 70 models of toy haulers on the market today, there’s an SURV out there to carry everything from a single dirt bike to a small passenger car.

Choosing the right toy hauler starts with knowing your own camping habits and destinations. Consider what toys and how many people are coming along for the ride when deciding which toy hauler is right for you.

How much your camping toy weighs will be a major factor in choosing the right toy hauler. A full-loaded toy hauler is significantly heavier than a traditional Travel Trailer and comes with its own driving and braking challenges. Assess the towing capacity of your vehicle before making your toy hauler choice.

Next, consider where your adventures take you to determine if you need a toy hauler with off-road capabilities. If snowmobiles are going in the cargo bay, add four-season weatherization to your toy hauler checklist, or face the possibility of broken water tanks and lines.

The stability of a fifth wheel toy hauler also makes it a better choice than a motorized toy hauler if your action camping takes you off road.

If the family and multiple toys will be along for the ride, a fifth wheel may also be the right toy hauler choice. Many fifth wheel toy haulers will sleep up to six people with a hard wall separating the cargo area from the living quarters. Options in the cargo area can include fold-up sofas, workshop or storage areas and room for multiple toys or, even in some larger, stout models, room for an additional family vehicle.

From the simplest mini toy hauler to a 36-foot luxury model, travel trailer toy haulers offer convenience, versatility and flexibility at a variety of price points.

Lower heights, lighter weights and some smaller sizes make travel trailer toy haulers a good choice when your action camping takes you far off road. Bumper hitch travel trailers require less specialized towing equipment than a fifth wheel and are available at a more modest cost than a motorized toy hauler, making them desirable for RVers looking for a simple road to family fun.

With a range of sizes and designs, tow-behind toy haulers offer RVers the most choices, from mini all-in-one trailers with fold-down beds in the cargo bay to a massive towable with all the comforts of a luxurious coach. The largest of the towable toy haulers will feature a living space with a cargo space separated by a solid wall, much like a fifth wheel or coach toy hauler.

There’s no better way to choose the toy hauler that’s right for you than looking in person. Crossroads Trailers, New Jersey’s No. 1 dealer in fifth wheels, has a full-selection of new and used toy haulers and the staff expertise to guide you to the right toy hauler.